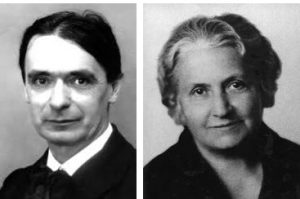 How do they compare?

The Waldorf and Montessori movements are both holistic, child centered approaches to learning. Both movements began in similar times, in similar parts of the world (Rudolf Steiner (above – L), founder of Waldorf Schools, was from Austria, and started the first Waldorf School in Germany in 1919; Maria Montessori (above – R) was from Italy and started the first Montessori school in Rome in 1907) as an answer to a very rigid educational system. Steiner, who lived in a very industrial, intellectual part of the world, brought a rich and beautiful arts-based curriculum to Waldorf Education. Montessori, who lived in an arts-rich culture, brought science and math as a focal point of the Montessori curriculum.

Both Steiner and Montessori developed educational systems that were developmentally appropriate for children, and both stress a learning environment that is aesthetically pleasing. Both systems are designed to awaken the senses of the young child, and both incorporate moral development in their curriculum. Both philosophies discourage television for young children and consider it to be detrimental to the child’s social, emotional, and intellectual development. Both philosophies also value the concept of students having the same teacher for several years.

There are many differences in the “methods” of the two philosophies. 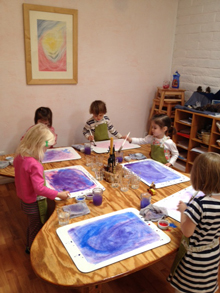 In Waldorf School, the young child is given much time for imaginative play. The toys in a Waldorf classroom are specifically designed to be used in many different ways. In fact, the less finished and more suggestive a toy is the more educational value it has- because it engages the imagination of the child (planks of wood become tree houses or ironing boards, silk cloths become knight’s capes or baby blankets). Academics such as reading and writing are left until grade school, while a foundation for literacy is built in the early childhood classes. Creative, interactive play is considered the foundation of both social and intellectual development. Movements such as skipping rope, walking a balance beam and clapping games help children integrate their vestibular and sensory-motor systems which will enable them to focus their eyes, sit still and focus their attention in the classroom. They strengthen their neural pathways with fine motor skills such as finger knitting, kneading bread dough, digging in the garden, drawing, beading, and sewing. They are exposed to rich language through storytelling, song and puppetry. This strengthens the memory of the young child and also the child’s ability to put complex language in context—setting up a beginning of advanced comprehension skills.

In Montessori School, the young child’s activities are considered “work”. The classroom contains specially made learning equipment and the child is given challenging intellectual tasks. The children are free to choose their own activities within the classroom. The Montessori philosophy is designed to integrate children with the world around them by presenting them with factual material. Each object in the Montessori classroom has a specific place and purpose (a twig may be part of a flower arranging learning center, or a seashell may be part of a math manipulatives box). The children in a Montessori classroom are engaged in mental activity; the children are seen as having an absorbent mind ready to soak up knowledge like a sponge.

Waldorf schools engage children in a social education. The grade school teacher “forms” the class of children to be a thriving community that accepts all members—acknowledging the strengths and challenges of each member and encouraging cooperation. The curriculum is diverse and non-competitive. In addition to the traditional subjects such as math and language arts, every student also receives world languages, music (including vocal and instrumental and movement classes visual arts (including painting, drawing and sculpture), practical arts (including knitting, sewing, felting, and woodworking), non-competitive physical education, drama, and much more. With such a wide range of subjects, children see first-hand the talents of every member of their class.

Montessori schools engage children in challenging intellectual tasks and allow them to follow their own interests, thereby letting them work ahead in their areas of proficiency. The curriculum is individually guided, and children move about the classroom to different centers, working alone and in small groups to achieve their academic goals.