More Than Honey – A Documentary on Bees

In the last few years, Tucson Waldorf School has established a great relationship with The Loft Cinema. We feel deeply fortunate to have the unique opportunity of collaborating with this Tucson gem: a local, independent, art house cinema that is a non-profit organization supported entirely by the community. 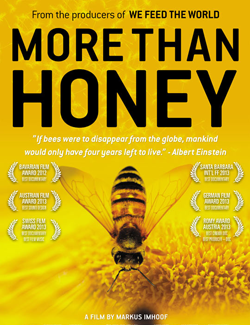 We accepted the offer to co-present this film because it portrays a very important and timely topic. More Than Honey is one of many films that have recently illuminated a variety of perspectives on Colony Collapse Disorder. In 1923, Rudolf Steiner – Founder of Waldorf Education – predicted Colony Collapse Disorder and in the 20’s, published a series of lectures in a book called Bees. Research continues to be conducted worldwide in efforts to pinpoint the factors causing the widespread destruction of bee colonies. Studies reveal again and again that a high prevalence of multiple pathogens in Colony Collapse Disorder bees suggests that a compromised immune response is at play.

But why? The film, More Than Honey, makes the statement that there is no one cause but that a complex set of factors are to blame. Among them are pesticide use, Africanization of the honey bee, and modern industrial beekeeping practices.

Steiner offered this in one of his lectures on bees: 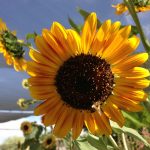 “Observing things in this way, one is able to say — in the whole inter-relationship of the bee-colony — of this organism — Nature reveals something very wonderful to us. The bees are subject to forces of Nature which are truly wonderful and of great significance. One cannot but feel shy of fumbling among these forces of Nature. It is becoming increasingly obvious today that wherever man clumsily interferes with these forces he makes matters not better, but worse. He does not make them worse all at once, for it is really so that Nature is everywhere hindered, though notwithstanding these hindrances Nature works as best she may. Certain of these hindrances man can remove, and by doing away with them can make things easier for Nature. For example, he seems actually to be helping Nature when he makes use of bee-hives which are conveniently arranged, instead of using the old straw skeps.

But here we come to the whole question of artificial bee-keeping. You must not think that I am unable to see — even from a non-anthroposophical point of view — that modern bee-keeping methods seem at first very attractive, for certainly, it makes many things much easier. But the strong holding together — I should like to say — of one bee-generation, of one bee-family, will be impaired in the long run.

Speaking generally today, one cannot but praise modern bee-keeping; so long as we see all such precautions observed of which Herr Müller has told us, we must admire them in a certain sense. But we must wait and see how things will be in fifty to eighty years time, for by then certain forces which have hitherto been organic in the hive will be mechanized, will become mechanical. It is not possible to bring about that intimate relationship between the colony and a Queen that has been bought, which results naturally when a Queen comes into being in the natural way. Only, at first these things are not observed.

Of course, I by no means wish that a fanatical campaign in opposition to modern bee-keeping should be started, for one cannot do such things in practical life. To do so would be rather like something I will now tell you. It is possible to calculate approximately the time when there will be no more coal in the earth. The coal supply of the earth is exhaustible; one day it will come to an end. Now it would be quite possible to limit the amount of coal taken out of the earth, so that the supply would last as long as the earth itself. One cannot say that we ought to do so, for we should have a little faith for the future. One says “Well, of course we rob the earth of its coal, that is we rob our descendants of coal, but they will be able to invent something else so that they will not need coal any longer.” Naturally, one can say the same about the disadvantages of modern bee-keeping!

Still, it is well to be aware of the fact that by working mechanically we destroy what Nature has elaborated in so wonderful a way. You see bee-keeping has at all times been highly valued; in olden times especially, the bee was held to be a sacred animal. Why? It was so considered because in their whole activity, processes reveal themselves which also take place in man himself. If you take a piece of bees-wax in your hand you are in reality holding something between blood, muscle and bone, which in man’s inner organization passes through the stage of being wax. The wax does not however become solid, but remains fluidic till it is transformed into blood, or muscles, or into the cells of the bones. In the wax we have before us what we bear within us as forces, not as substance.” – Rudolf Steiner

We hope to be able to greet you at the film event, More Than Honey, at the Loft Cinema, August 29, 2013. 7:00 pm. More information on Tucson Waldorf School events can be found at tucsonwaldorf.org.